Creamy, dreamy macaroni and cheese made with two kinds of cheddar cheese and loaded with sour cream, chives, bacon, and green onions – just like your favorite potato skins. A few months ago I was invited to participate in Mac and Cheese Mania.

Yes, you read that correctly. Mac and cheese. MANIA. If you think I didn’t immediately sign up, then you don’t know me very well.

Unfortunately, I also promptly forgot about Mac and Cheese Mania until just a couple of weeks ago, when our hosts – Rachel and Brandy – were kind enough to email us a little reminder.

Suddenly, I found myself full of panic. What in the world would I make? What mac and cheese would be good enough for Mac and Cheese Mania?

In my panic, I turned to Boyfriend, looking for suggestions.

“Potato skin mac and cheese.” <– Perhaps the 5 most beautiful words to ever leave his lips. The man is a genius.

And so, this Potato Skin Mac and Cheese was born. Creamy and dreamy, this recipe uses two kinds of cheddar (a sharp white cheddar and a milder yellow cheddar cheese) in a cheese sauce flavored with chives, bacon, and a hint of sour cream. The whole cheesy shebang is loaded into individual ramekins (because who wants to share?) and topped with even more sharp white cheddar, crumbled bacon, and green onions. Just like your favorite potato skins. Excuse me, I need to go shed some tears of joy.

As if mac and cheese pretending to be potato skins wasn’t enough, there is even more goodness involved in Mac and Cheese Mania! When you head over to Rachel or Brandy’s posts, you can link up your favorite mac and cheese recipe for a chance to win some great prizes, including Door to Door Organics Gift Cards, OXO Gift Baskets, Zak Designs Prize Pack, a year’s supply of Cabot cheese, a Vermont Creamery gift basket, and much more. Holy prizes, Batman! And no worries – you don’t have to be a blogger to link up and enter. (All giveaways open to US residents over the age of 18 only.)

Make sure to read after my Potato Skin Mac and Cheese recipe to see what all of the other bloggers cooked up for the event! There are dozens of great recipes here…I’m going to be dreaming of mac and cheese for weeks.

A special thank-you to our Mac and Cheese Mania sponsors, Door to Door Organics and OXO. 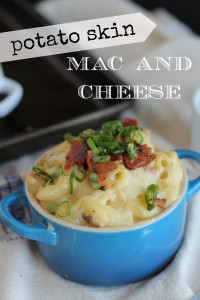