Vegan Sourdough Banana Bread is a great way to use up your sourdough starter discard! This easy banana bread does not require eggs or milk, making it easy to whip up even if your pantry is a little sparse!

Sourdough starter is really having a moment.

With everyone stuck at home, it is hard to find someone who hasn’t at least considered dabbling in sourdough.

I’ve been a fan of sourdough for a long time. For a couple of years I had a starter made using my sourdough starter tutorial.

When we got married and were gone several weeks for the wedding and honeymoon, I ended up letting my starter die off. RIP.

Several months ago I decided to get into sourdough again. This time, instead of making my own starter, I got some from a friend who works at a local bakery.

If you aren’t up for starting your own from scratch, getting some from a friend or a bakery is a great option. The older a starter is, the more flavorful it is, so you’d be ahead of the game from the jump. 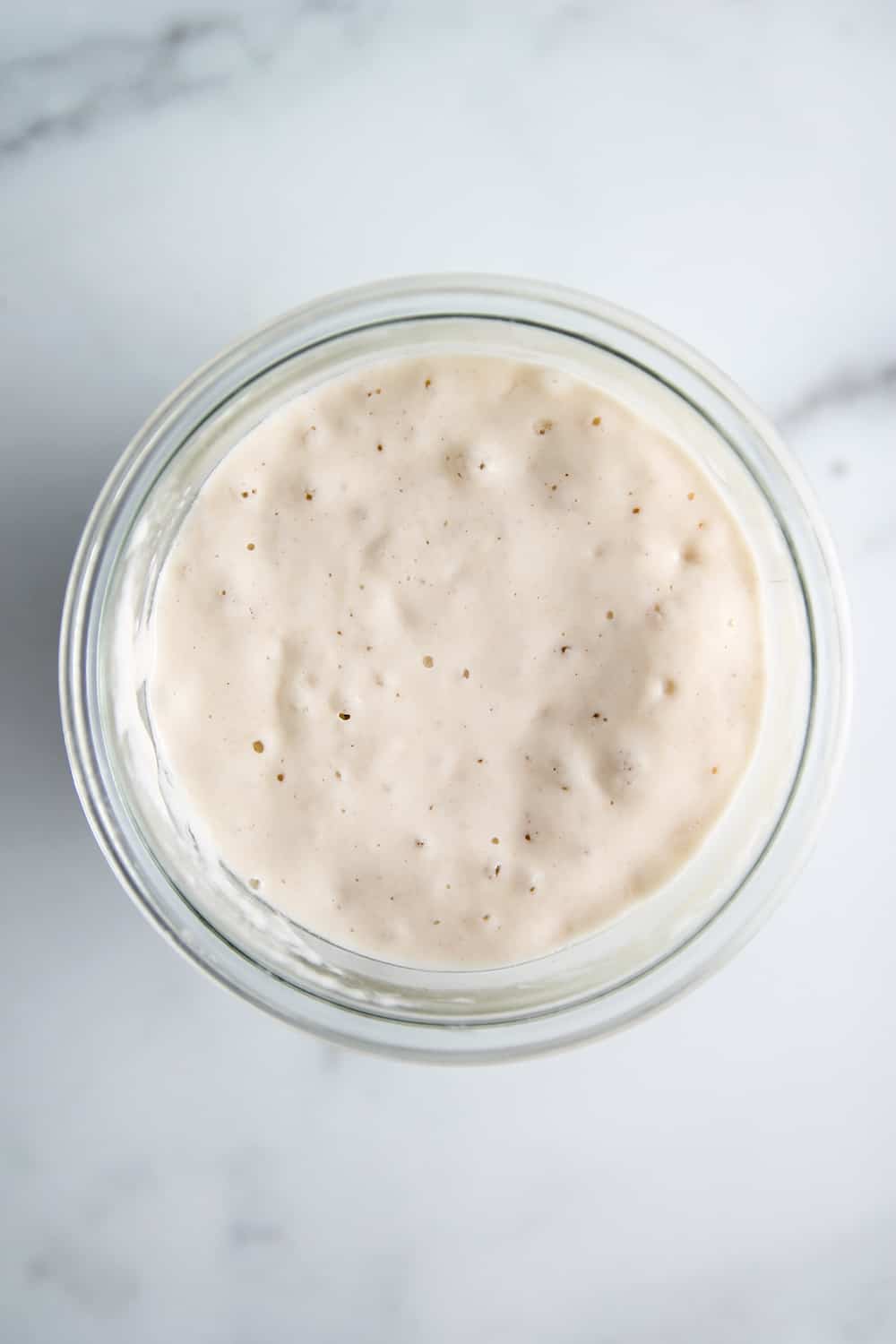 Either way, one of the things I like most about sourdough is how versatile it is.

Sure, you can make a traditional sourdough boule or batard. (My current favorite being Joshua Weissman’s No Knead Beginner Sourdough Bread.)

But you can also make less-traditional breads, such as sourdough focaccia or Roasted Strawberry Sourdough Muffins, with your starter.

Hell, you can even make pancakes, waffles, or sourdough crackers.

The thing about making recipes like muffins and crackers is that you can actually make use of your starter discard – that is, the leftover starter that you would normally throw away when you feed your starter.

But one of my favorite ways to use my discard is in this Vegan Sourdough Banana Bread. 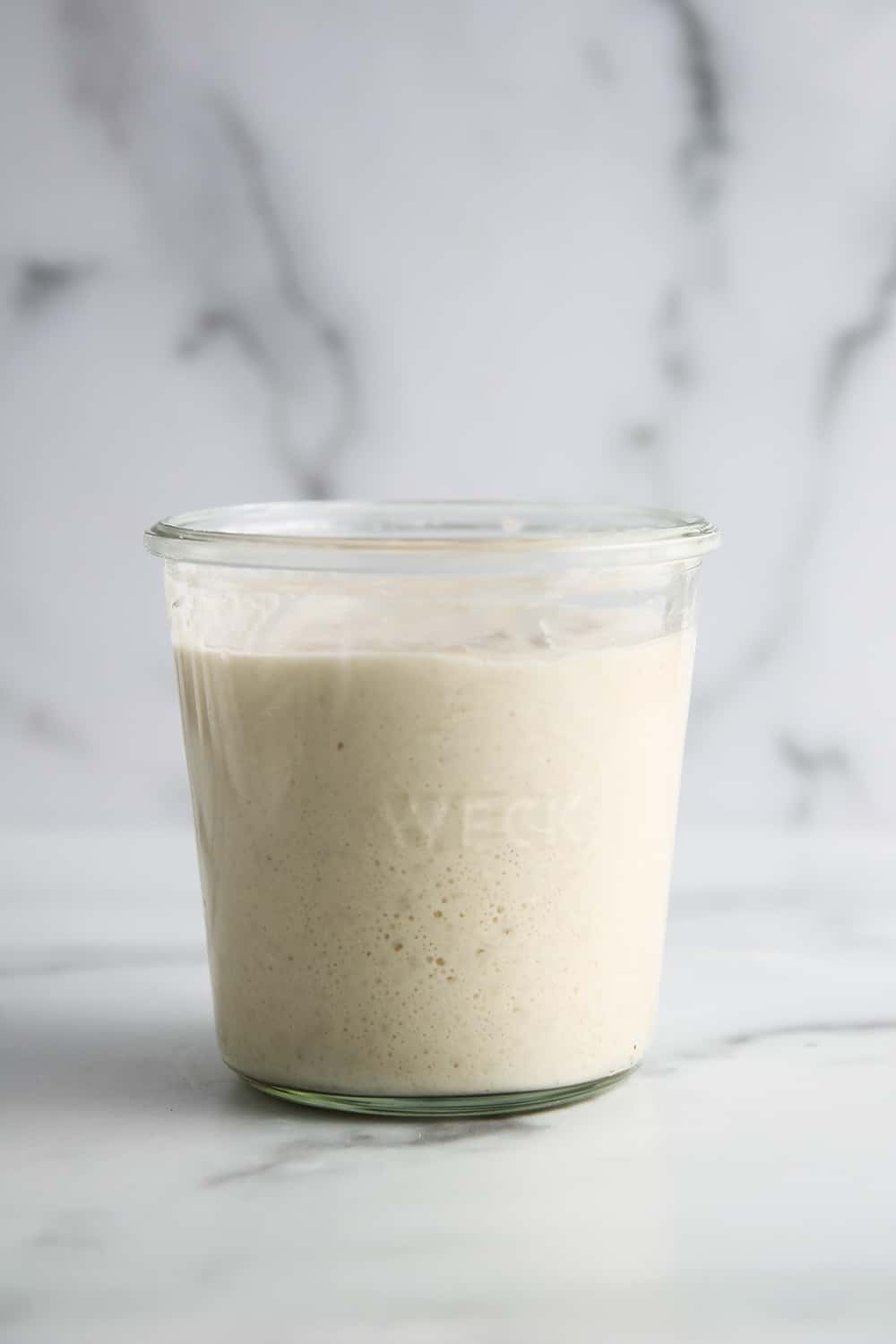 As you guys know, I’m not strictly a vegan baker, and most of the time my vegan recipes are only vegan by accident.

But the happy side-effect of this recipe being intentionally vegan is that, in addition to using up your sourdough discard, it can be made even if your pantry and fridge are looking a little sparse.

No eggs? No problem.

No milk? No problem.

No butter? No problem. 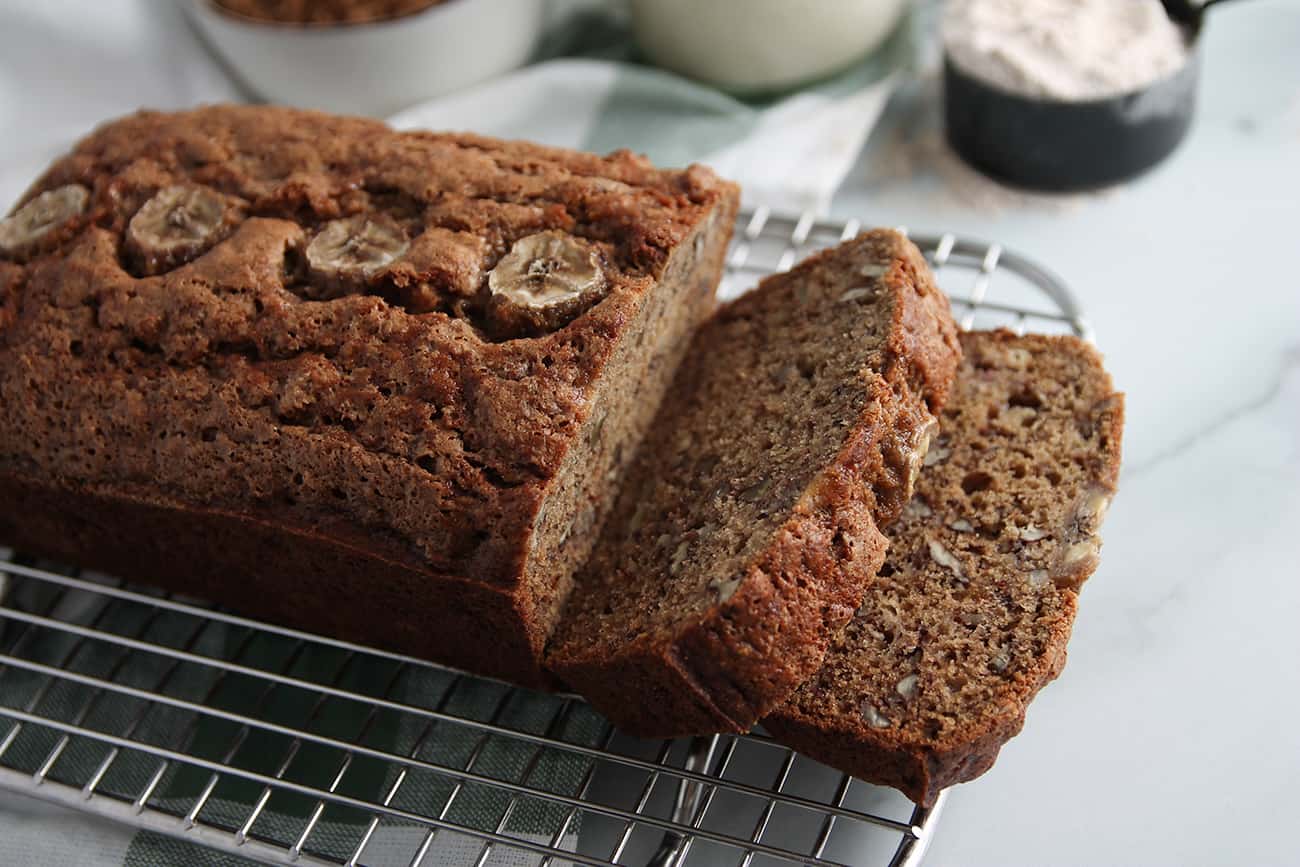 The sourdough starter provides the same moisture and tang that buttermilk would in traditional banana bread, and a “flax egg” (ground flax and water) stands in place of chicken eggs.

This recipe also has very little oil, using only 2 tablespoons of coconut oil.

If you like, you can use one large egg in place of the “flax egg” if you happen to have eggs on hand (and don’t need the bread to be vegan, of course).

HOW TO MAKE SOURDOUGH BANANA BREAD

Unlike traditional sourdough breads that require stretching and folding and long fermentation (rise) times, making Vegan Sourdough Banana Bread is not that much different from making regular banana bread.

First, combine the ground flax and the water. As that hangs out, it will thicken and take on a consistency similar to an egg. This is your “flax egg”!

Whisk together the dry ingredients.

Mix together the wet ingredients.

Pour into a prepared loaf pan and bake!

I like to make this bread with some chopped pecans, but you could go for some chocolate chips if you prefer.

But what about toppings? Before baking, you can sprinkle the top with some more ground flaxseed, cinnamon sugar, or more chopped pecans!

You could even decorate the top with some slices of banana. Really, it’s all about what sounds best to you.

How you eat your banana bread? Well, that’s up to you. Although I personally suggest it warmed with some butter {or, you know, vegan margarine} and a hefty sprinkling of cinnamon sugar.

But that’s just my opinion.

If you don't need the recipe to be vegan, you can use 1 large egg in place of the "flax egg" (ground flax + water) in the recipe.